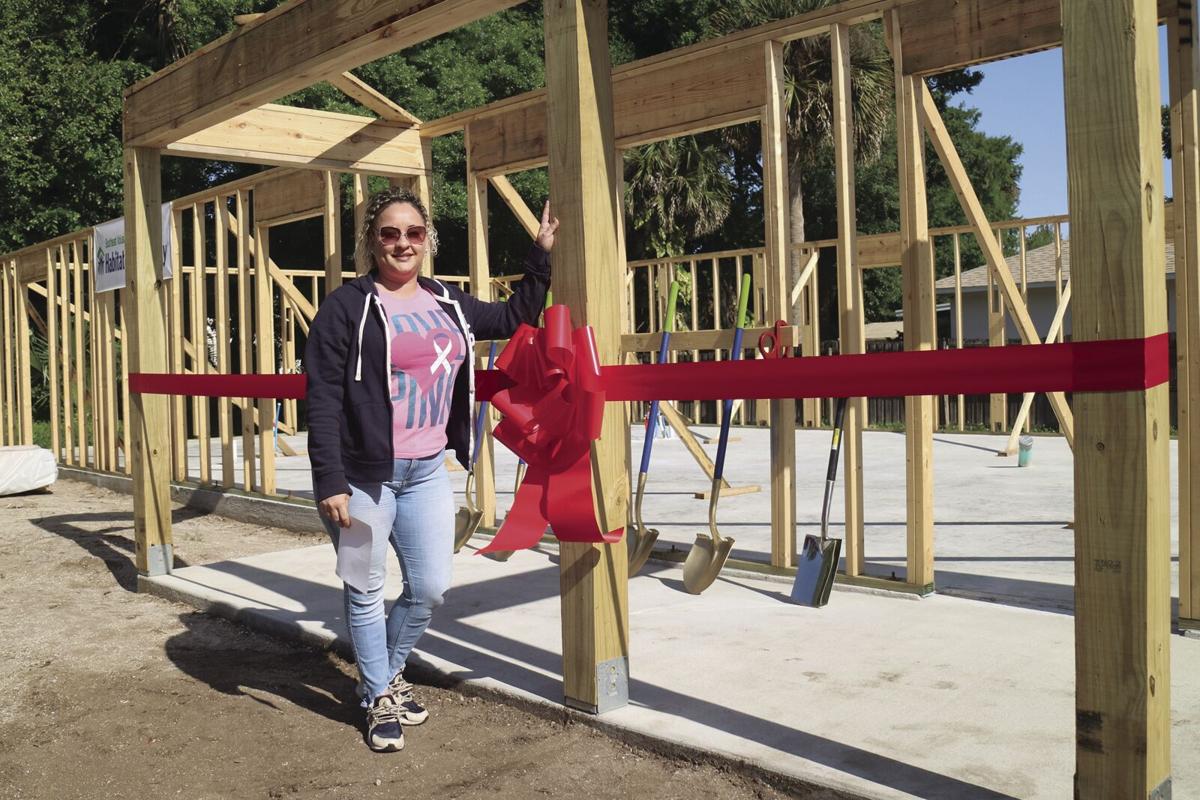 Janelle Figueroa will be putting some “sweat equity” into her new home through the Southeast Volusia Habitat for Humanity. 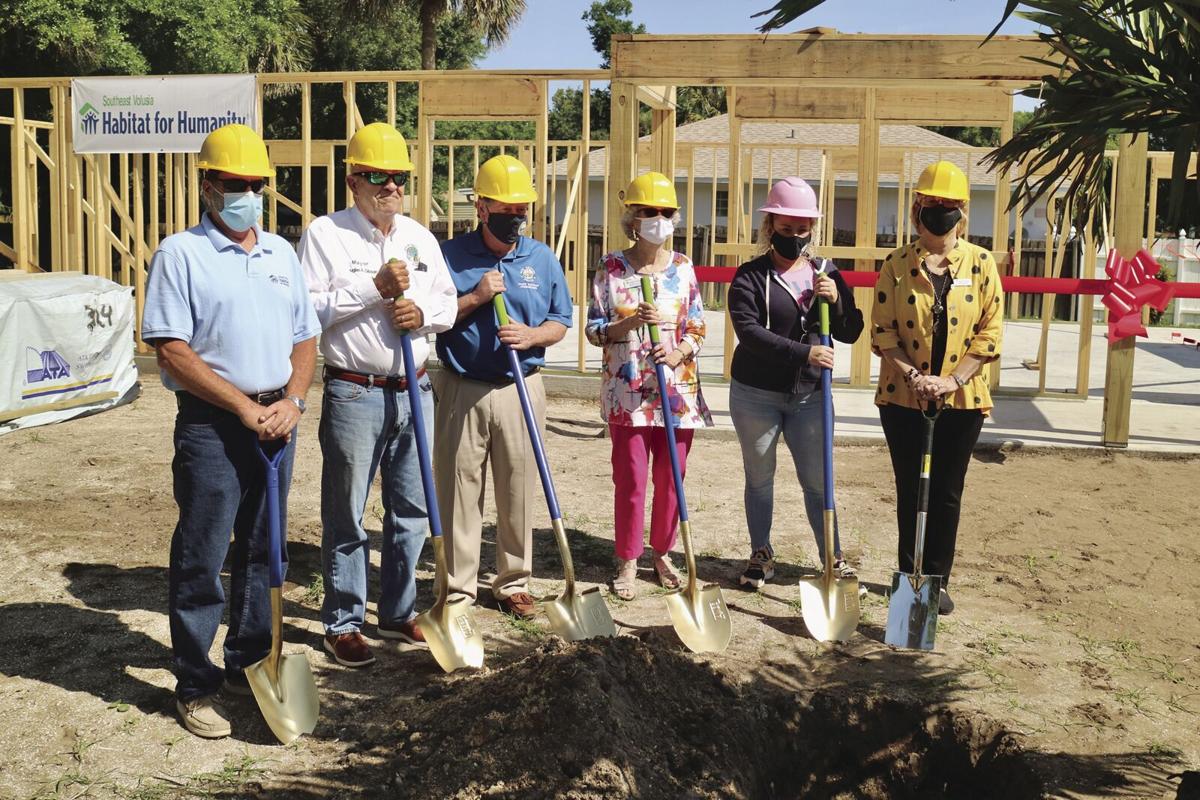 Janelle Figueroa will be putting some “sweat equity” into her new home through the Southeast Volusia Habitat for Humanity.

There were cheers and tears of joy in New Smyrna Beach on Earth Day as Habitat for Humanity, city officials and one happy family participated in a groundbreaking ceremony for what will be the 155th home for Habitat in Southeast Volusia County.

The groundbreaking at 200 Howard Ave., included ribbon-cutting and tree-planting ceremonies.

“Today’s an exciting day for us at Habitat,” said Regis Sloan, president of Southeast Volusia Habitat’s Board of Directors. “We’re planting a tree to celebrate Earth Day and a family is planting themselves to celebrate having affordable housing. Nothing could be better than that.”

“Affordable housing is a passion of mine,” said Commissioner Hartman. “And it’s always good to see a local resident who is going to be able to take that next step.”

Without a doubt, the most excited guest at the event was Janelle Figueroa, the single mom who will be moving her family into the home when it is completed.

“I want to thank Habitat and everyone else who is involved for blessing myself and my children with this wonderful opportunity,” Ms. Figueroa told the crowd, which included Habitat staff and volunteers. “I’ve been working hard my whole life and waiting for a time like this. It’s a blessing.”

Habitat for Humanity was established in 1976 to assist families around the world in obtaining decent and affordable housing. Its unique program invites families to partner with Habitat to build new homes for themselves on land obtained by the organization. Families chosen for the homeownership program provide what Habitat calls “sweat equity,” committing to hundreds of hours of volunteer service building homes and serving at Habitat ReStore facilities. Once a family’s home is completed, Habitat provides interest-free mortgages for the new homeowners.

Couples partnering with Habitat to become homeowners must complete 450 hours of volunteer work. As a single mom, Ms. Figueroa is required to complete 350 hours. After completing 175 hours of work, she was eligible to select the lot on which her home is now being built.

She said putting in her “sweat equity” has been a great experience. “I’ve enjoyed it a lot. I’ve learned a lot. I’ve been surrounded by great people.” She said she remembers well filling out the application to become a Habitat homeowner in 2018. “It took some time. I had to get some work in, but I was consistent. I was determined and I got through. They believed in me.”

The construction of the Figueroa home is expected to take 12 to 18 months and will be accomplished in large part by volunteers. Mr. Billings commended Habitat’s volunteer force, saying, “We build some of the finest homes in Florida on a very tight budget and we would not be able to do it without our volunteers.”

Southeast Volusia Habitat has more than 100 volunteers who serve, including a core group of a half-dozen who Mr. Billings said “are there everyday we work.” Volunteers on Habitat building sites help with all aspects of construction from roofing to painting to laying sod. They include men and women of all ages, although volunteers who are younger than 18 years old are restricted from using power tools.

Jack Travis, a member of the Southeast Volusia Habitat Board who has been volunteering with the organization for 16 years, praised the Habitat staff for creating an environment where anyone can contribute. “The guy who supervises all of the volunteers is supervising teachers and pharmacists and retailers, people who really don’t know how to build houses, but he does it in such a way that you come out with a finished product that is better than most of the ones that are commercially built.”

Sven Johnson, who also volunteers on the Habitat Board as well as on job sites, came to the organization without any prior construction experience. “When I started volunteering, I couldn’t hit a hammer and a nail together. Everything I’ve learned about construction, I’ve learned from these guys.”

There are seven Habitat homes in the construction phase in Southeast Volusia County. Those interested in volunteering with Habitat can contact Habitat’s Coralie Gilson at (386) 428-5010 or coralie@habitatsev.org.

Those interested in partnering with Habitat to build a home of their own can apply in person at any Habitat ReStore. Once an application is submitted, a decision is made within 30 days. Habitat considers factors including the applicant’s housing situation, willingness to volunteer, and ability to pay on a mortgage. Southeast Volusia’s ReStore is at 722 S. Dixie Freeway, New Smyrna Beach.

Sign up for our free e-newsletter:
Email newsdy@hometownnewsol.com to get started.

The Hub on Canal